Sign by road is all for wayfinding, no directions to door. Styrofoam plates, however they did have can recycling. Ordering and payment was in advance.
Ordering was simple, and there were two lines to quickly move everyone through.  No fancy wayfinding, but effective 8.5x11" black and white signs lead you to the cafeteria.   They recycle cans, but still lots of styrofoam plates.

Cod was good, but overall about average. Sides, however, were excellent and some of the best anywhere. Spaghetti, green beans with peppers and tomatoes, rice pilaf, mac and cheese, corn bread - everything was made with care! Even the kids cheese pizza wast tasty. Homemade style chips. Also had baked tilapia.
The fish fry is catered by Russo's and served by volunteers.  So there is a slight asterisk to this fish fry.  With that disclaimer, the sides were very good.  The green beans and the chips are a highlight.  The Cod was OK, I ended up using tartar sauce.  And because of it being catered, it wasn't piping hot from the fryer as you'll get at some fish fries.

$7 for 2 pieces of Cod, $8 for 3 pieces, included lemonade/coffee and dessert. We were stuffed! Kids meal was $4, but one slice of pizza was plenty for two kids under 6 years old.
Good value.  $10 for adult plate of either Cod, shrimp, or salmon, with dessert.  $4 craft beer/wine.  $3 domestic beer.

We got there at 5:30 and from then to 6:30, it was packed. Lively and friendly. Only downside, no-one cleared tables though.
Comfortably crowded at 5:30, but you could easily move through the line.  Someone was quick to recycle my can.

Overall:
3.0 out of 4. Only held twice over Lent, so volunteers weren't quite as efficient as other places. Sides were definitely the highlight. Come early (before 5:30 to beat the big crowd).
Mary Queen of Peace is a "catered" fish fry from Russo's served by volunteers.  Sides are a highlight and a they had 3-4 craft beers. We may have had them ranked too high in 2008, but still a good, solid and enjoyable fish fry.

Other Reviews and Fun Links for Mary Queen of Peace:
If you know of other reviews or links, please share via the comment section below!
Reviews 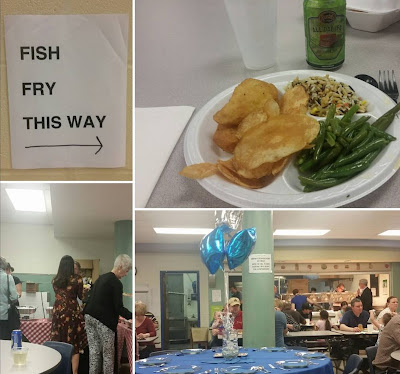